After some time learning Python and tinkering with it, I decided that it was time to use it in a “real world” application. After some thinking, I came up with the idea to program a web gallery generator, which would not be a too big project to work on my spare time and would also be useful to maintain my web site.

So I took some time to brainstorm about the functionality to put into the application and came up with the following list:

Looking at these requirements, it became quickly obvious that a standard Python distribution would be able to handle most of these requirements, except the image manipulation part. After some research on the net, I found that the Python Imaging Library would be the ideal candidate for this part. For the graphical interface, I decided to stick with Tkinter, which is a defacto standard for Python Gui’s.

The design phase revealed the need for about a dozen classes and coding was rather straightforward, except for some problems that will be described in the next section.

Even if the application is a small project, it displays some interesting techniques with Python:

A first annoying problem I encountered was that the xml.dom.minidom.parse(file) function seems to add empty elements when the xml stored in the file is stored on multiple lines.

This seems odd as the minidom is the standard DOM implementation delivered with Python. Anyway, the workaround was to read the file line for line in memory, to remove the line endings and then to concatenate it into a string. The string is then parsed using the xml.dom.minidom.parseString() function

I encountered a second annoying problem when I tried to validate numeric input in TKinter Entry fields. This is no standard Tkinter functionality and you have to know the underlying Tk toolkit to know what to do. So I tried to recall the little Tk knowledge I possessed and after some googling and Python/Tk voodoo came up with a solution that subclasses the Tkinter Entry class:

Even if the quality of the resized images is good, it is still below the quality of images resized with other tools, for example BreezeBrowser. In comparison the images generated with PIL are a little bit more blurry, even at the best JPEG quality available. I think the quality is good enough to generate Web Galleries, but an improved quality would be welcome nevertheless. 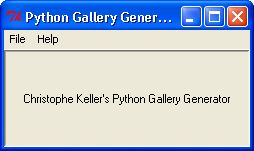 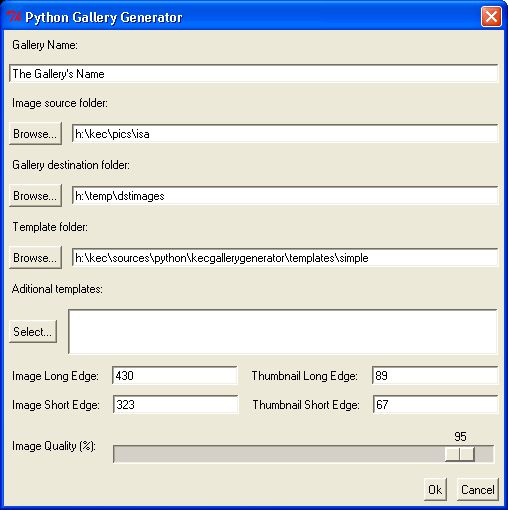 The archive also contains two sample template folders, one with very simple templates and on with the actual templates I use for my web site.

Currently the Gallery Generator has already a good level of functionality and suits my needs well, however I’m thinking on adding the following things to improve the generator:

This small project has shown me that Python is much more than a simple scripting language but must be seen as a full-blown programming language that incidentally happens to be interpreted. It provides an extensive standard library and modules for many application domains can easily be found on the net.

However, it also has its quirks as we have seen above which can be annoying. I my opinion, the productivity claims of some Python evangelists must be seen as wishful thinking, and this for the following reasons:

That being said, Python is a fun language to work with but like any languages it has its learning curve which must not be underestimated. 🙂